Skip to content
OUR HISTORY
Posted on March 30, 2018 by Apaar Mahajan

Apaar Mahajan, Founder of Gipfel, owes his line of work to the immense passion that he inculcated for mountains and outdoors during countless vacations that he spent throughout his childhood at his ancestral home in a Himalayan valley town of Chamba, Himachal Pradesh, India. A precocious child, he was deeply intrigued and inspired by the mightiness of the peaks of Dhauladhar and Pir Panjal mountain ranges that were visible from the terrace of his ancestral home. Having spent many afternoons on the roof of the house, which was a loosely held arrangement of slippery, sloping, fluted tin sheets fastened together with screws, where no one else went except for occasionally visiting families of monkeys, Apaar developed solid interest in the mountains and outdoors. Because he was always told that the ‘jotein (in local dialect, pronounced – joh-tain)’ were too far to reach and no one ever went there those mysterious snowy mountains intrigued him even more and fueled his imagination. He never did actually step foot on those high peaks until the next decade. He grew up, earned a degree in Mechanical Engineering and his Masters at University of Oxford, UK. 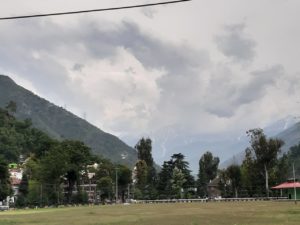 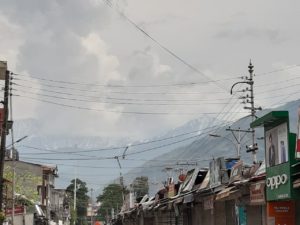 Dhauladhar Range from a street in Chamba

View from the roof but the peaks are hidden behind clouds

In 2011, he was introduced to mountaineering through courses in Austria and India followed by climbing in India, Nepal and Tibet. It was a dream that had come true. The snowy slopes of the mountains were even more magical than he had imagined.

Apaar was perpetually frustrated with the quality of outdoor gear in India. It was either made locally with less durable materials or imported with premium and no option for repairs. He wanted to make high quality outdoor gear that would facilitate responsible exploration of the extraordinary territories of the Himalaya. To keep the product competitive and offer after-sales service, the equipment had to be made in India. He already had the industrial experience, so it was then that Gipfel Climbing Equipment was formed with a mission to offer greatest quality equipment that is not just made in India but also come with after-sales service.

Gipfel Climbing Equipment is India’s first manufacturer of CE and UIAA certified climbing equipment and camping equipment like tents and sleeping bags. We are an honest and a sincere brand that started out with a mission to promote climbing in India and most importantly to support climbing communities in their effort towards opening and maintenance of new climbing areas. Our mission is to provide very high quality equipment that is made in India and to offer impeccable after-sales service.

We are a spin-off entity of a forty year old company, Maxwel Exporters – one of India’s leading export houses specializing in manufacturing of Sports Equipment. In addition to its core product line, Maxwel has been an original equipment manufacturer to world-renowned climbing equipment brands. We have a state-of-the-art infrastructure comprising of metalwork, CNC machining, forging, plastic injection moulding, hosiery and rubber moulding units. Manufacturing climbing equipment is not everyone’s cup of tea. We realized that our location, resources, and expertise in manufacturing placed us in a unique position to bolster our local climbing communities, give climber’s access to high quality gear and ultimately excel Indian climbers into the future. This has been the original idea, and one that we continue to hold onto today.

On various occasions during our expeditions in India, we came across amazingly talented people who didn’t have the financial resources to buy the right equipment nor an opportunity to advance their techniques by learning from the more experienced climbers from other countries. Because there was no other Indian producer of climbing equipment, the equipment had to be imported. After adding the custom duties and dealer margins, the end product became so out of reach for many Indian climbers. The concerning part was that we saw climbers settling for unprofessionally made sub-standard equipment. Climbing communities were struggling to get high-quality bolts and anchors from Europe and had to rely on family and friends (aka “bolt mules”) to transport this gear in their suitcases during holiday or work visits. The climbing communities needed someone to help. We wanted to help.

Loved by many people worldwide